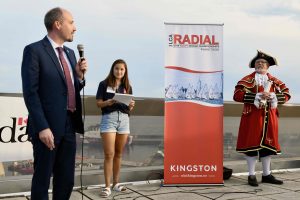 The 2019 edition of the ILCA Laser Radial Youth World Championships is set to get underway. 208 competitors from 32 countries have gathered together in Kingston, Ontario, Canada to compete for World titles in both boys and girls divisions.

Sailors made their way through inspection over the past two days, some with relative ease, while others had, shall we say, a bit more difficult time. To the inexperienced viewer, it might seem overwhelming, with so many sailors ferrying different parts of their equipment to and from various measurement stations, in a seemingly endless procession over the course of 12 hours with hardly a break. There is a relief of finding out everything is ok, or the unhappy surprise that, in fact, the sail is not properly numbered, or the washer on the rudder head is too large, or the broken batten tip is not acceptable. The plea that it passed inspection at event ABC last month falls on deaf ears. A few fixes are quick, there are others that take a bit longer. And then there is having to completely re-number and re-letter the entire sail. Eventually, everyone passed through inspection, the first step on the path to a championship. The succinct speeches from key speakers were followed by the enjoyment of an array of tasty hors d’oeuvres and convival company. Thanks to CORK for putting together a really enjoyable event to kick things off.

Hearing it from the sailors, most of the boys will definitely be in the gold fleet, while three quarters of the girls are planning to be in the top 10. So, expectations are running high, or at least hopes and desires. And at this point, everyone is starting in the same position: registered and ready. [This may not be one of the more glamorous images from a Laser World Championship, but this scene is about what truly makes the event happen: volunteers meet to coordinate, deal with issues, and make sure everything runs smoothly.]

If history is any guide, there are some sailors here who have been sailing well in other recent high profile events and would seem to be likely contenders for claiming the title of World Champion. In the girls division, Rosine Baudet of Switzerland would have good reason to feel confident, having finished third in the 2019 European Regional Championships for Radial Youth followed by a sixth place at the Youth Sailing Championships in Poland. Great Britain’s Matilda Nichols had similarly strong finishes in the same events, placing eighth and fifth respectively. Or perhaps Theresa Wierschin of Germany will put together a solid performance over the next week, coming off her finish of 10th in Poland. Hunter Dejean was the highest ranked Canadian girl at the Youth Sailing Championships while Grace Austin was the highest ranked American there. In the 2019 North American Championships, Kaitlyn Hamilton (USA) had a good showing in a mixed Radial fleet, as did other Americans Heather Kerns, Amaya Escudero and Emma Shakespeare. On the boys side, there are going to be quite a few people to keep an eye on before the field begins to narrow down, too many to mention them all. Yalcin Citak of Turkey and Zac Littlewood from Australia finished first and second respectively at the just completed Youth World Sailing Championships in Poland. Yalcin Citak was also the highest finishing sailor at the European Championships who will be competing here in Kingston. And Zac Littlewood was the 2018 World Champion in the Radial Men’s World Championship. Meanwhile, 9 of the top 10 finishers in the Radial division of the North American Regional Championships are in the field. The top five at that event were USA sailors Chapman Peterson, Daniel Escudero, Asher Zittrer, Matthew Wallace and Leyton Bocherding. From Canada, Ryan Anderson, a top 20 finisher at the Youth World Sailing Championships is another competitor to watch.

Perhaps it is no wonder confidence is running high for quite a few sailors on the eve of racing.